Posted on September 4, 2010 by NotAScientist

The tardigrade, better known as a ‘water bear’, has become my new favorite animal.

Why, you may ask? What makes them so special? How are they better than my favorite animal?

Simple. Your favorite can’t survive in the vacuum of space.

Tiny invertebrates known as water bears are in one sense far tougher than humans who can crush hundreds of them underfoot: A new study has shown that the water bears can survive the vacuum and radiation of space. The water bears, who are more properly known as tardigrades, were launched into orbit aboard a European Space Agency satellite, where they were exposed for 10 days to the cold, low pressure, and intense radiation of space before being brought back down to Earth to study.

Researchers already knew that water bears were unusually tough critters. [T]hey prefer to spend their days in water, perhaps on a beach or a dewy patch of moss. But when the water dries up, the millimetre-long ‘bears’ can contract into a dried-out state and survive like that for years. They are also one of the few animals that survive year-round on continental Antarctica, and are among the most radiation-resistant animals known [Nature News].

Not only that, but they’re just so darn cute!

And for you creationists out there, I have just one question. If god intelligently designed humans, why didn’t he give us the power to survive in space?

The extra limbs would come in handy too.

Posted on September 3, 2010 by NotAScientist

Hello, ladies and gentlemen, and welcome to ‘Field Work Friday’. It’s a blog segment I hope will last longer than just this one.

Each week my plan is to either post about or conduct a simple but interesting experiment that can give us a little more information about the world and those that inhabit it. Sound fun? Or insufferably boring? Only time can tell!

And no fair cheating, time travelers.

So because this is the first I’m going to immediately chicken out by asking you, dear reader, to give me some ideas. What experiments have you always wanted to conduct? What studies have you wanted to run to attempt to prove or disprove the assumptions we all make?

I will perform the best answers here on this very blog! So get to it, fellow non-scientists.

Stuffed animals have skeletons, don’t they?

Perhaps you heard about the woman who tried to smuggle a tiger cub through an airport this weekend.

If nothing else, the story illustrates how ignorance of relatively simple scientific concepts can lead to failure.

Authorities at Bangkok’s international airport found a baby tiger cub that had been drugged and hidden alongside a stuffed toy tiger in the suitcase of a woman flying from Thailand to Iran, an official and a wildlife protection group said Friday.

The woman, a Thai national, had checked in for her flight and her overweight bag was sent for an X-ray which showed what appeared to be a live animal inside, according to TRAFFIC, a wildlife trade monitoring group.

What Ms. Palasarn failed to realize is that scanning machines known as x-rays can actually see inside the objects they scan. Objects like luggage, stuffed animals and baby tigers. And as shocking as it may be to this young lady, the inside of a stuffed animal looks VASTLY different than the inside of a living thing.

The last I checked, my teddy didn’t have working organs.

The bad news: This is just another example of how most people in the world have no idea how science and technology works.

The good news: Criminals seem to be statistically just a bit more likely to be ignorant than the rest of us. Unless you believe what you see in the movies. One day I’ll do a study to confirm this hypothesis.

The better news: At the time I’m writing this, the baby tiger is alive and recovering from its ordeal. And while a wildlife center may not be the best place in the world for it (which would be its natural habitat, I should think), I think it’s much better off than wherever Ms. Palasarn was going to take it.

It is important news, but it’s hardly surprising:

A federal appeals court denied the existence of a link between vaccines and autism, specially the MMR. Autism is a disorder that affects 1 in 110 children in the United States. A special vaccines court was held last year and the appeals court upheld the decision that the evidence was weak and contradictory.

It’s good news for the simple fact that it’s nice to see when a court rules in favor of the scientific evidence.

It’s bad news because we should not be looking to courts to determine what the science says about subjects! And this isn’t because I am biased against courts. It’s just that the court room is traditionally one of the least scientific places in the known universe.

On a witness stand, however, a mother or father who is sincerely upset and confused and angry about the condition their child has is infinitely more moving and convincing than cold facts and figures. Because humans are by no means perfect logical and rational animals. We let our emotions rule us quite a lot of the time…and that isn’t a judgment, just an observation.

The problem is that when we let emotions rule the day, as often happens in front of even the best judges and juries, it is so easy to come up with the factually wrong conclusion.

It’s nice when they get it right. But it still scares me when we look to them for the answers.

Science: It May Save Your Life

It saved mine only a year ago. But the story goes back a bit farther than that.

It was September of 2007 and I was experiencing some discomfort. I’d been helping a friend, a really incredible local theater director, put on a show for a local festival. I was given the title of ‘producer’, but that was merely due to my director friend’s kindness. In reality I was there just to help on the business side. I took and sold tickets, handed out programs, and helped set up the audience’s chairs before the show. The show could easily have gone on without me, but it was nice to help out a friend nonetheless.

It was before one of these shows when I started to feel pain. Pain when I urinated. For those of you who have experienced, you know there’s something very distinct about that particular kind of burning that occurs when you have a urinary tract infection. And while this pain isn’t particularly debilitating it isn’t something you want to endure for long.

So I ignored it.

I ignored it for about 12 hours. The burning started late Friday afternoon, so I decided to endure it at least until Saturday morning to see if it went away. When it didn’t (obviously) I walked down the street to my nearest  Emergency Room and was given some antibiotics that got rid of the burning in less than a day.

Unfortunately this would not be the end of my adventure. I was advised to make an appointment with a urologist. Being male, UTI’s were much more likely to be indicative of a more serious condition. So off to the doctors I went where I had to undergo poking and prodding and was inserted into a tube that scanned my important bits. Which is when they found the mass on my right kidney.

Now, I don’t want to make this sound scarier than it was. Because, in all honesty, I wasn’t scared. My UTI had been taken out by the antibiotics, so it had nothing to do with whatever was on my kidney. And the mass wasn’t even that big. 1.5 centimeters in diameter. Since my kidneys had never been scanned before, for all my doctors knew the mass could have just been a normal part of my kidney that was a little off. Couple that with the fact I had no other symptoms, we decided the wisest course was to wait and watch.

About a year and a half later, after 3 separate MRIs, I was sitting in a surgeon’s office who told me he was 80% certain the mass was a cancer. It had grown to 2.5 centimeters and even if it wasn’t cancerous it isn’t smart to keep a growing mass on one of your internal organs. Or so I’ve been told. The answer? SURGERY!

As luck would have it, in the preceding six months I had undergone a tonsillectomy and had my wisdom teeth surgically removed. Surgery was no longer the scary unknown it could have been. And since I was still symptom free (other than the hitchhiker on my kidney), I wasn’t all that worried.

I’ll spare you the gory bits. Put simply, I checked into the hospital, had a twelve-inch incision made in my side, had part of my 11th rib removed, and that innocent seeming ‘mass’ was expertly scooped out, biopsied and discarded. After 4 days of recovery in a room I had to myself (how lucky am I!?), I was given a prescription of percocet and strict orders to take it easy for at least the next month.

It turns out I had renal cell carcinoma. Thanks to a random UTI and the persistence of doctors, from the ER resident all the way up to my surgeon, I had it removed while it was small and hadn’t had a chance to spread. And I still have 90%, if not more, of a completely healthy right kidney. 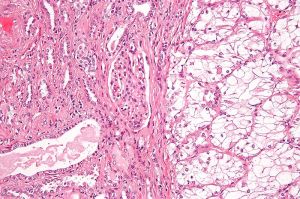 Turn back the clock 50 years and I wouldn’t have found out about the tumor until it had grown enough to give me some pretty serious symptoms. Another 50 years and we’d probably only know about it once it killed me. Granted, I did get lucky. But if not for the advances made by scientists over the years to modern medicine, I may not have been here to write this.

Some of you may view this as being overly dramatic. But it’s the simple truth. Science saved my life. And maybe, one day, it will do the same for you.